In the digital age, the focus of enterprise/business/application/etc. architects is not the thing (strategy, policy, service, rule, application, process, etc.) – the focus is how the thing changes and how things change together.

In addition to being cheaper, faster, better it is mandatory to become to more agile, more synergetic (i.e. IoT), more comprehensive.


This blogpost outlines how BPM can enable changes which accelerate improvements and innovations in the digital age.

This blogpost is based on the blogpost “#BPM for software architects – from monolith applications to explicit and executable #coordination of #microservices architecture” http://improving-bpm-systems.blogspot.ch/2014/08/bpm-for-software-architects-from.html (referred as “base” blogpost below).

Both aggregates and components (some of aggregates are components as well) will be analysed from the change (evolution) point of view. In other words, how to carry out changes of each particular artefact and all afterfacts together without breaking the system - enterprise as a systems of processes ( see http://improving-bpm-systems.blogspot.co.uk/2014/03/enterprise-as-system-of-processes.html ) and for achieving the enterprise goals.

Note: Evolution is related to the impact analysis, dependency management and optimisation.

It is considered that all artefacts are versionable and several versions of the same artefact may co-exist in the company’s computing environment. Traceability considerations are at maximum – everything (including changes and work done) is logged as records.

All artefacts are wrapped as services (actually, microservices). A process coordinates (with the use of various coordination techniques – see http://improving-bpm-systems.blogspot.co.uk/2014/03/coordination-techniques-in-bpm.html ) various services and it is a service itself. Thus process is an explicit and executable way to aggregate smaller services into bigger ones. In other words, a process is an aggregated service.

Versioning of artefacts (10.3 from by book http://www.samarin.biz/book )


To achieve the versioning of artefacts it is necessary to understand how to treat relationships between artefacts (see 2.4.4 of the book).

We recommend that a system be evolved via some kind of transformation cycle as shown in Figure 1. Start with a stable configuration of approved artefacts. Then introduce a new version of the artefact B3 which is available only for one consumer (i.e. artefact A2) which has to be also versioned. After achieving higher confidence with these new versions, switch all other consumers (i.e. artefact A1) to the new version of the artefact B3. When it is considered that all new artefacts are functioning correctly, their old versions can be removed. The transformation is over and a stable configuration of approved artefacts is once again reached. 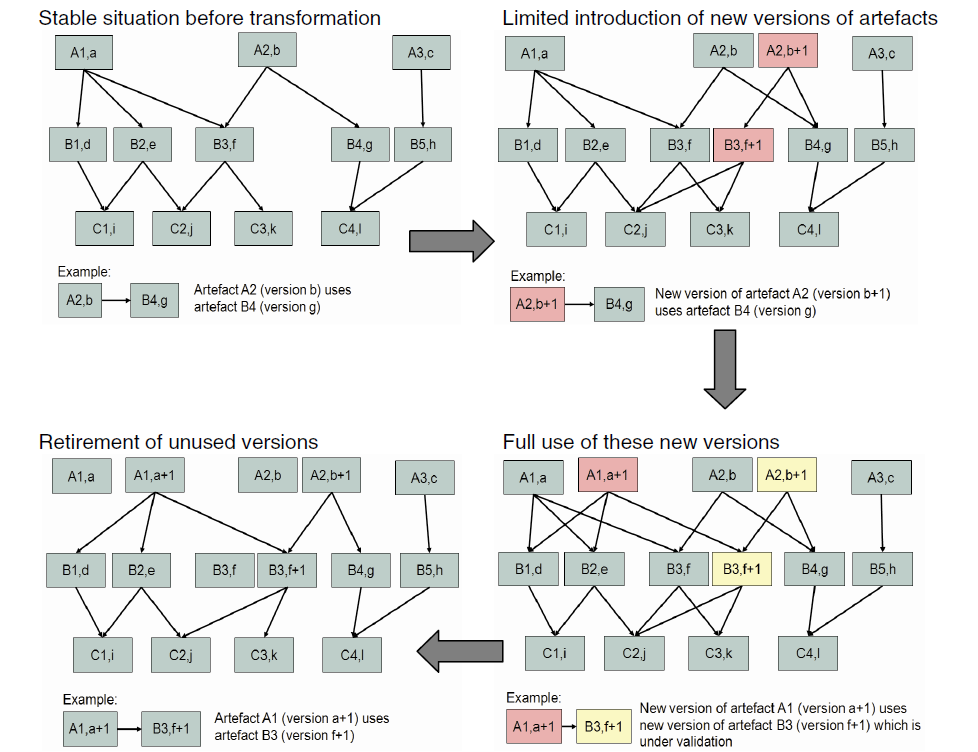 In a properly architected system, you may carry out several transformation cycles at the same time. 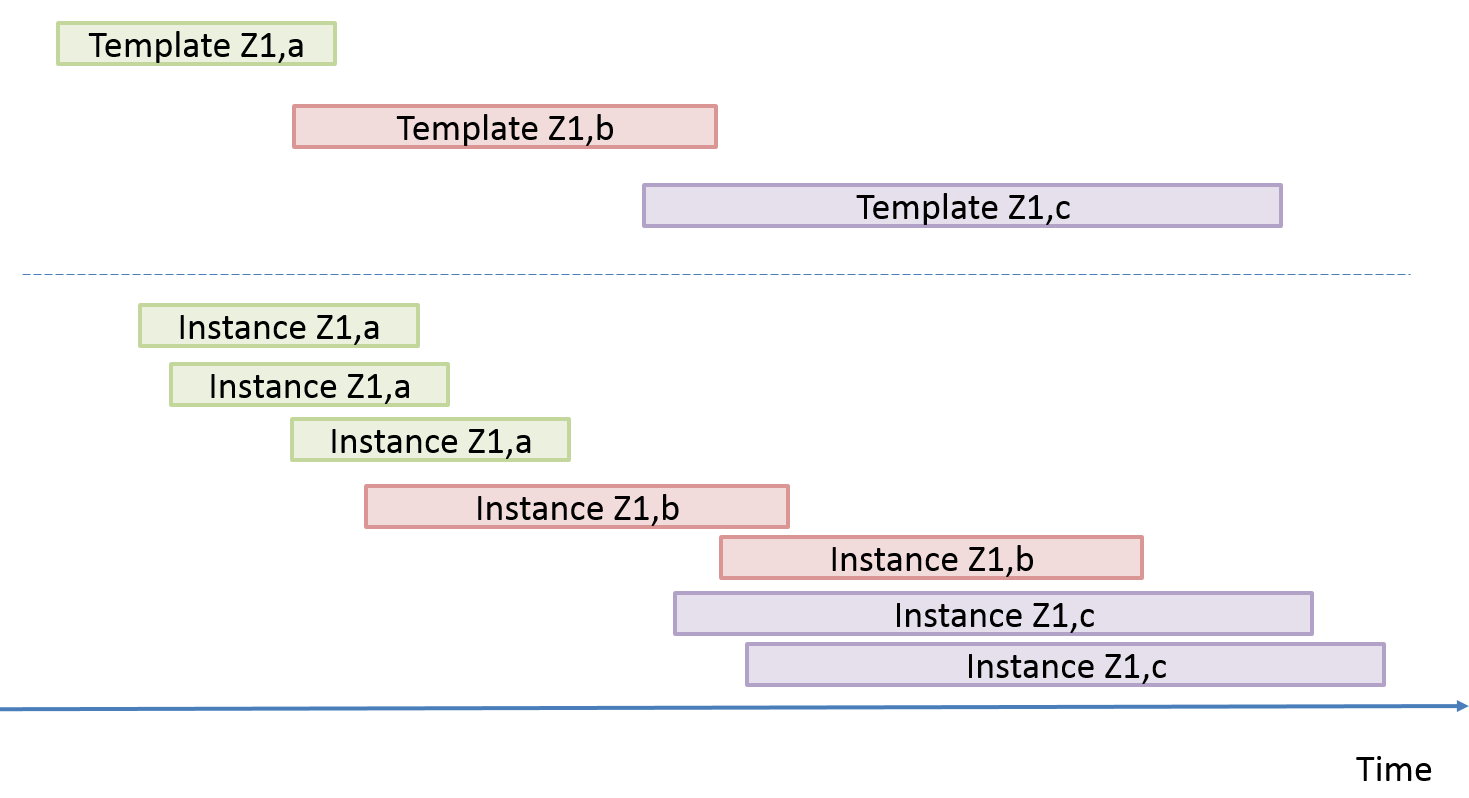 
Process-centric artefacts and relationships between them are the following:
Also, one can read more about artefacts in chapters 7 and 11 of the book.

Note: Events may be processed via EPN and decision management techniques.

Potential side-effects (evolving together): None at the moment (just explicitly ignore event if it does not launch any processes).

In practice, the main reason to evolve process-instance is for correcting various errors and exceptions, e.g. in data or in rules or in automation. If some of the components are expected to be quickly evolving or “shaky” then the relationships between the composite and these component should be indirect thus manageable externally.


Roles should be define in a suitable DSL externally from the process template and changes for a particular process instance should be possible. Usual technique is to have a set of dedicated functional roles (Responsible, Accountable, Consulted, Informed) for each human activity within a process and be able to provision these roles by various organisational and other roles externally from the process template.


Rules is a typical service which is implemented in a DSL (decision management notation). This service is stateless and easy to evolve.


Audit trails are easy to evolve. Ii is important to define them explicitly in processes, for example, like measurement-points. Audit trails must be kept outside the process engine in, for example, an enterprise data warehouse thus be independent from evolution of BPM suite itself. Typical process execution data (start/finish time for each activity, etc.) must be merged with some business data to associate separate process-instances which treated the same business objects.


If audit trails are done correctly then KPIs are easy to evolve.

Human activity is implemented as an interactive service. Sometimes, such a service is a generic tool (which is external to process-template) and such a tool should receive from the process-instance a reference to a human activity to be treated. This is an example of indirect relationship mentioned above.


As a good practice, business data structures are kept in a generic format (e.g. SDO) and transferred along the process as a black box. To implement some routing logic, additional technical or process-template-specific data structure is created. Bridging between business and technical data structures is done by in automated activities.


Documents are kept in external repositories, e.g. a document management system or ECM tool. They are referred via URLs and some metadata.


Automates activity is the most “shaky” component of the process (as an aggregate). The indirection binding which is used for them is done through a “robot” (see 2.3 in the base blogpost). Robot is a very stable service and the process-instance passes to it the name of the automation script to be executed as well as input and output parameters. The name of the automation script is a process parameter (thus changeable by the process-template administrator and the process-instance administrator) and input/output parameters are SDOs.

The typical error recovery practice discussed below. Figure 5 shows a “container” in which an automated activity “A” operates within the processes. The normal execution sequence is “E1-A-E2”. Because the automated activity may fail, the container contains the intermediate exception event "E3" and an activity for Error Recovery Procedure (ERP).

In case of failure, the recovery execution sequence will be “E1-E3-ERP-E1-A-A2”. ERP may be very trivial (just try again) or more intellectual (try three times and then ask a person to have a look at it).

In additional to exception, it is necessary to define time-out to prevent endless automated activities as shown in Figure 6. 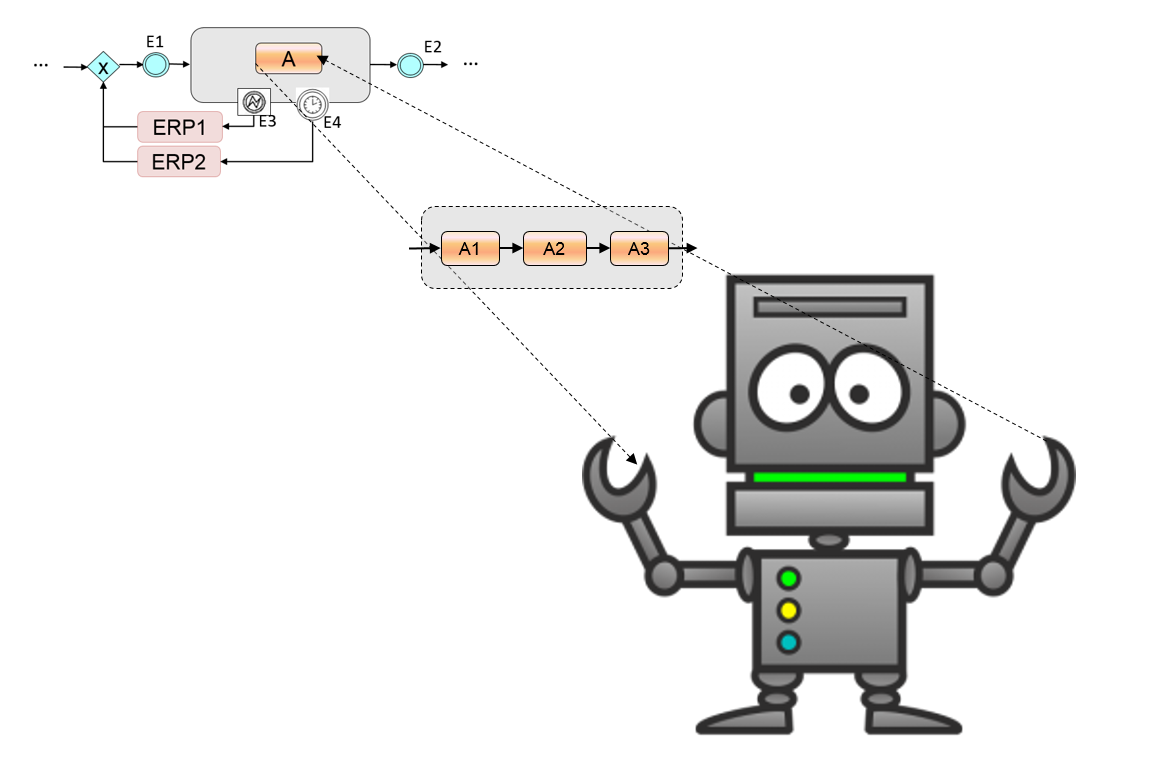 Figure 7 Execution of an automation script by the robot

Again, normal execution sequence is “E1-A1-A2-A3-E2”. In case of failure of “A2”, the sequence will be “E1-A1-A2-E3-ERP1-E1-A1-A2-A3-E2”. The double execution of “A1” is possible because of that all micro-services are idempotent (see 2.10 in the base blogpost). If “ERP1” is a human activity then the correction of “A” automation script may be carried out within this human activity.

Note: Processes with only automated activities must be idempotent.

Figure 8 Queuing of jobs for robots

The queue is shared between various process-instances and it is possible to have several specialised queues. The queue size and robots are monitored.


The describe approach was used (since the year 2000) for a production system comprising about 3 000 complex products per year, 50 persons, about 50 different activities, 3 production chains, 6 repositories and 40 IT services (actually, a couple hundred of micro-services). The system was in place for several years. The maintenance and evolution of this production system required several times less resources. Also, several successful (and easy to do) migrations of its big components were undertaken.