A few interesting recent discussions about microservices:
have inspired me to write this blogpost in addition to the several recent blogposts:

In this blogpost I try to stay at the conception level and avoid any implementation details (such as WS, REST, XML, API, HTTP, JSON, Web, common libraries, Java, etc.) – let us validate the concept first and then talk about implementation techniques.

At the same time, it is considered that there is no commonly-agreed definition of “microservice”. One of the reference definition of “service” is in http://www.infoq.com/articles/updated-soa-principles .

My definition of “service” is “explicitly-defined and operationally-independent unit of functionality”.

If, for a moment, we are not fussy with the terminology then we can accept a current challenge in the application development as it is defined by Jean-Jacques Dubray (as a comment to the first reference): .

In other words, the question is how to implement an application as an organised collection of many autonomous components. Each Autonomous Component (AC) is (potentially) distributed (in-house or in-cloud) and thus it is a unit of deployment (otherwise it can be deployed in a separate host).

Note: At present, it is not possible to claim that ACs are microservices or services.

I think that this is a natural step in the evolution of the application architecture.

From monolith: one unit of deployment, one “in-process” (in techie’s meaning – in the same JVM), simple inter-component communication (again “in-process”) and simple error-handling (again thanks to “in-process”).

Then moved to client-server with two units of deployment (but not yet autonomous components): fat client (presentation and some biz logic) and the rest.


The word “autonomous”, being a keyword, requires an extra explanation. Some people associate it with “...Independent Scalability, Independent Lifecycle and Independent Data” but, let us look at the full life-cycle of AC.

In general, such a detailed life-cycle has the following phases:

Considering that each AC will participate in one or many assemblies for provisioning a “bigger” solution (or richer functionality), ACs are interdependent at their “creation” phases (contextualise, plan, design, build). Imagine that a highly-efficient team is created by the careful selection and training of people.

Ideally, ACs are independent at their “operation” phases (deploy, run, monitor and measure). For example, a high consumption of CPU by one AC will have no negative effect on other ACs. Or, an AC may be stop, un-deployed, re-deployed and resumed without determination of the whole assembly performance.

But, the binding or linking of ACs into an assembly makes ACs dependent in accordance with their contracts. Up-steam dependency is related to the AC’s performance. Down-stream dependency may happen as well by imposing some ACs to be used. (Note: There are several techniques to reduce dependency).

Thus, autonomicity of each component will vary from more to less (independency, dependency and interdependency) at the different phases of the full life-cycle.

Structurally interdependent, behaviourally independent and contractually dependent (Note: there are behavioural rules like in a red-card football) – what a mixture.

Working together in assembles


There must be a set of common rules for AC to help ACs work synergistically together (as an assembly) for a common goal. I think about the following rules:
Must AC be small or not? Ideally, they should follow SRP.

In extreme, ACs may work together as a group of fully-universal-agents (no specialisation) or as a team of specialised ACs (some team-sports). Particular type of specialisation may be a coordination of ACs with “small or simple” functionality into an AC with “big or complex” functionality. (For example, combining “generate PDF”, “protect PDF by a digital signature” and “disseminate PDF” together.)


Let us try to use ACs for some modern ideas about a better application architecture (again don’t be fussy with the terminology) as one of them cites below:

I think that the following types of AC are necessary to cover the majority of “modern applications”:

Archetypes of application which can be constructed from ACs 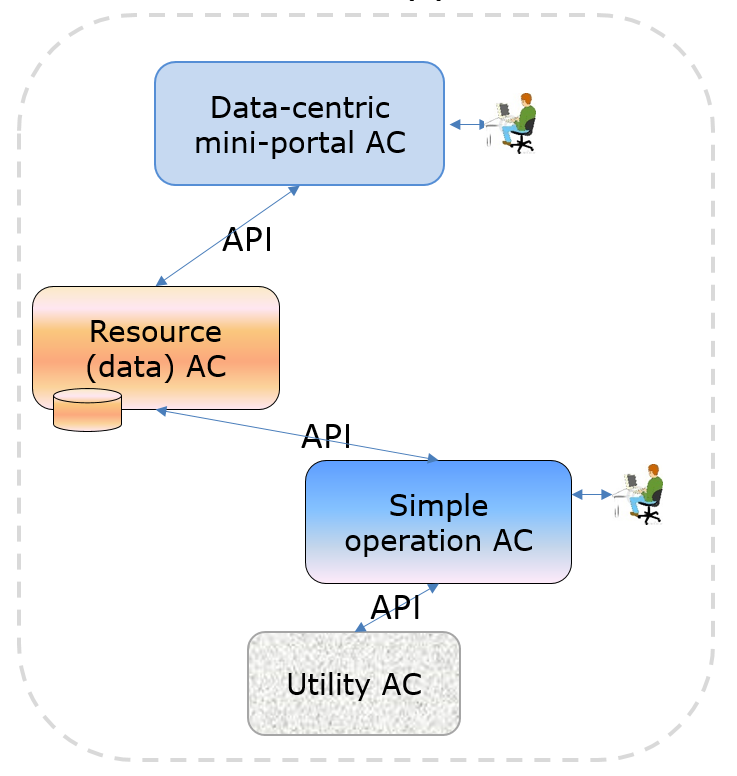 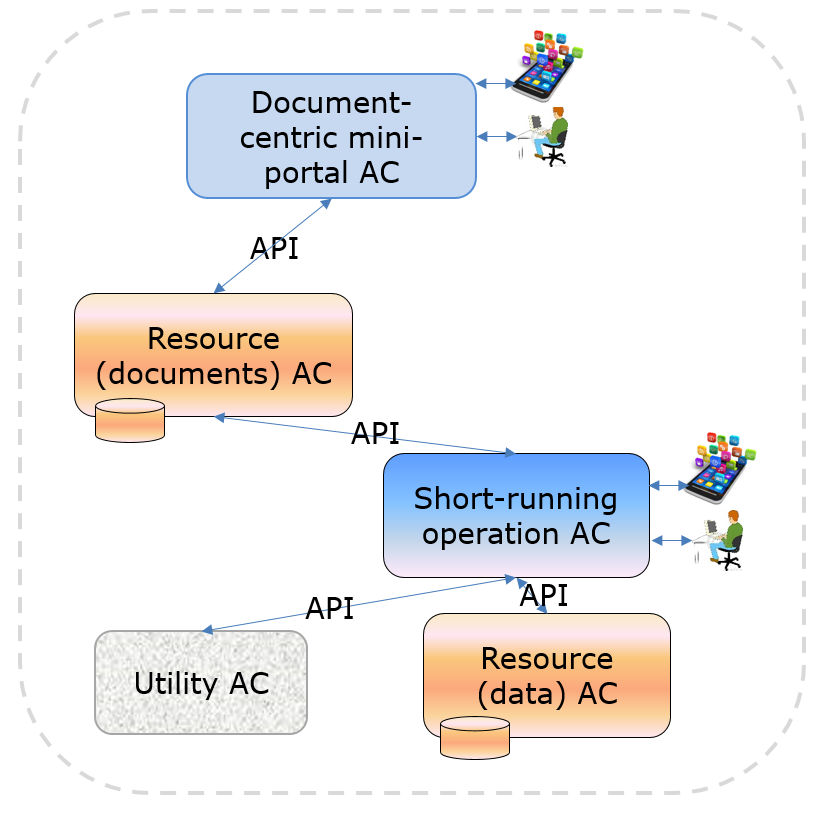 
Typical usage: browse a static list of operations, select an operation, associate with it some data/documents, execute this operation.

Note: all operations are short-running – they are completed in less than a few minutes (so a person can wait for their completion in front of the screen). 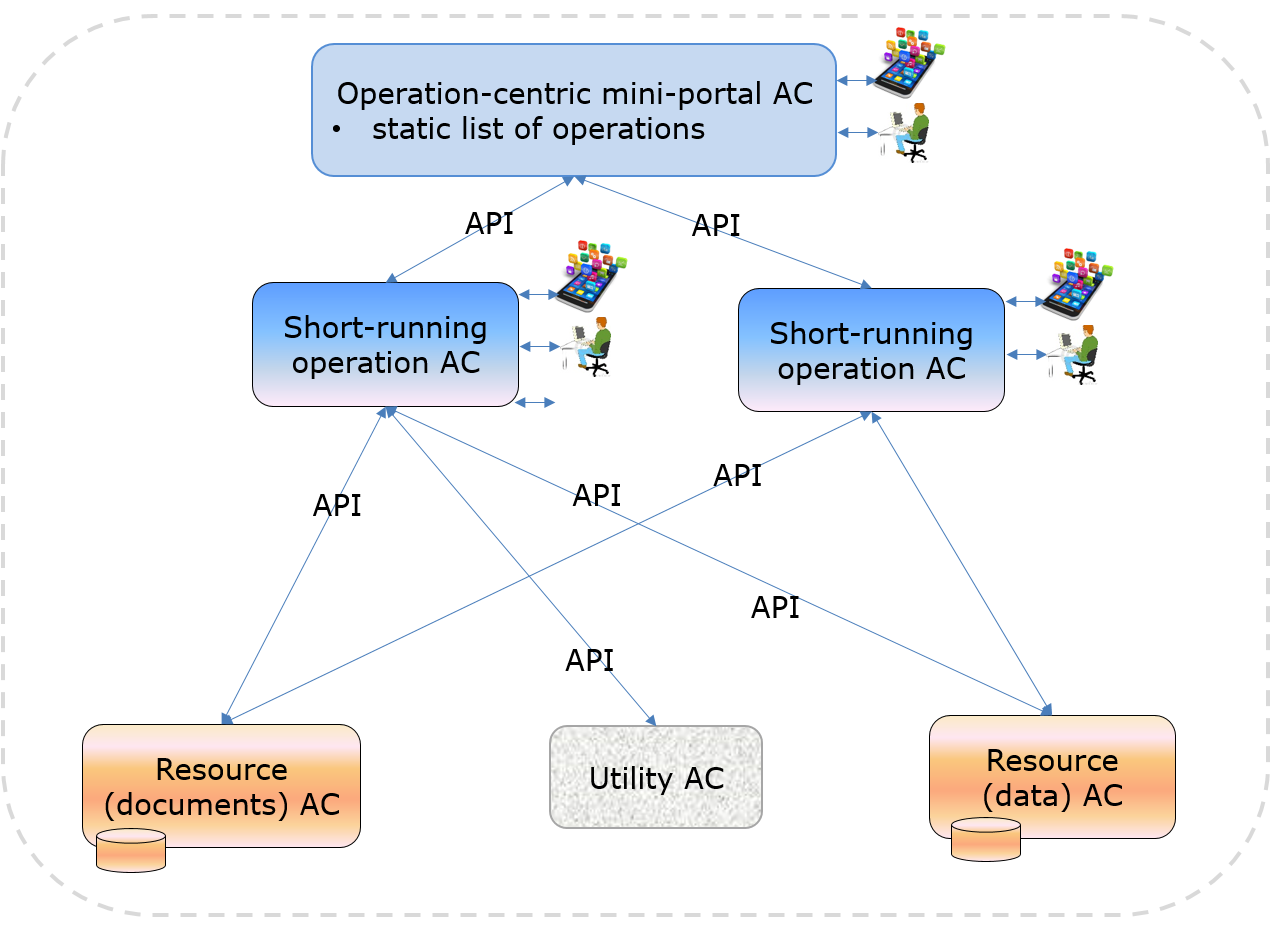 
Typical usage: browse the static and dynamic lists of operations, select an operation, associate with it some data/documents, execute this operation.

Note: all operations are long-running – they are completed in a few days / weeks (so a person cannot wait for their completion in front of the screen). 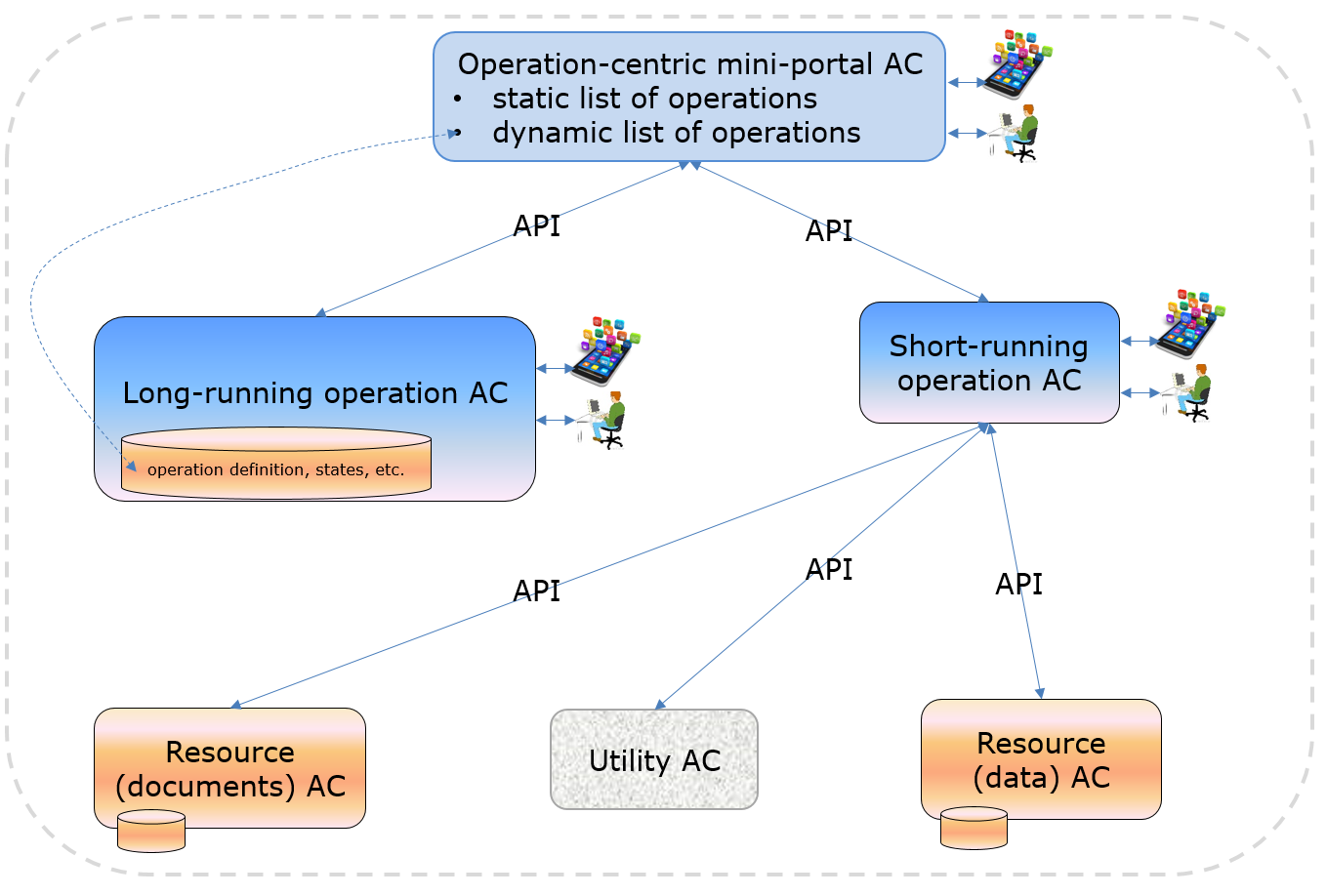 The static and dynamic lists of operation are role-dependent.

There may be a mixture of mentioned above archetypes.

Do you see other types of application? Do you know other specialisations of AC? Please share.