See also the previous blogposts of “Beauty of #microservices” series

2 Importance of containers for microservices

generic – JVM on top of any popular OS (experience in programming of portable software helped);

language-specific – Jython on top of JVM to run small Python programs, and

specialised – particular environment on top of Jython on top of JVM; this environment considerably simplified the development of automation and integration functionality. 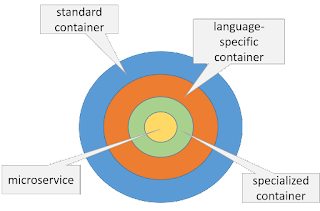 With each nested container, my microservices became more functional and easier to evolve. Finally, each of them was as small text fragments stored in a source version control tool; they were loaded into containers dynamically (at the run-time) and they could dynamically load some modules. Devops was minimal.