This article is a continuation of “Domesticate the #IoT as cyber-physical systems” article ( see http://improving-bpm-systems.blogspot.ch/2016/11/domesticate-iot-as-cyber-physical.html ). It uses the systems approach to define a reference architecture for Thing-as-a-System (TaaSy) which forms the IoT.

Cyber-Physical System (CPS) is a system (comprises physical and computational discrete parts) that can interact with the physical world and networking actors.

CPS for IoT is an CPS which makes a Thing as a System (TaaSy)which is accessible, programmable and collaborative via digital services.

Here is clarification of mentioned above characteristics of TaaSy:

The Viable System Model (VSM) – see https://en.wikipedia.org/wiki/Viable_system_model – describes principal functions and flow of data between them for viable (i.e. autonomous) systems. A viable system is composed of five interacting subsystems which may be mapped onto aspects of organizational structure.

By applying the VSM for TaaSy, it is reasonable to say that Systems 4 and 5 are almost absent because they are carried out by the owner and the manufacturer of the Thing. Systems 2 is about of routine coordinating various activities and System 3 is about exceptions handling and performance management. Considering the digital nature of TaaSy, Systems 2 and 3 can be combined together as well as necessary support for System 4.

Standard networking (i.e. over the Internet) and commodity computing software and hardware parts are deliberately not discussed.

Such a platform comprises drivers, supporting and enabling functionality as well as a layer with TaaSy-specific functionality.

Solutions which are built on top of this platform are from the following functional domains: operational domain, managerial domain, purpose-specific domain and IoT-specific domain. Those solutions use patterns, tools, services available in the platform. Preferably, those solutions are assembled from microservices ( see http://improving-bpm-systems.blogspot.ch/2016/08/better-application-architecture-apparch.html ).


This architecture is optimised for flexibility (quick delivery of new functionality), diversity (each TaaSy is different), uniformity (to avoid reinventing the wheel) and security (separation of functionality into units-of-deployment).

Potential processes in operational and managerial domains are the following:

All functionality is available as digital services and microservices. All of them have APIs which are developed under the same guidelines.

3 TaaSy collaboration patterns in the IoT


The specific feature of IoT is the ability of TaaSy(s) to collaborate between them and other networking actors.

The P2P collaboration pattern is about ad-hoc interactions between one networking actor and a particular TaaSy.

The majordomo collaboration pattern is about interactions between master (i.e. Majordomo TaaSy) and slaves (other networking actors but, primarily, TaaSy).

The digital-contract collaboration pattern is about interactions between several networking actors as peer (see http://improving-bpm-systems.blogspot.ch/2016/07/digital-contract-as-process-enables.html ).


To manage the security of IoT, it is mandatory to define explicitly individual and collective behavior of Things. This is addressed in the proposed reference architecture by intensive used of processes, internally within a Thing-as-a-System and between them as digital contracts.

Domesticate the #IoT as cyber-physical systems

This article is a continuation of “#IoT as a system of digital contracts” article ( see http://improving-bpm-systems.blogspot.ch/2016/08/iot-as-system-of-digital-contracts.html ).


The recent IoT-based DDOS attack confirmed the urgent necessity for more serious and systemic integration of the IoT into our civilisation. At present, many devices from the IoT “world” act as wild animals thus being dangerous.

Each member in our civilisation has to follow many rules & regulations & laws depending on contexts and his/her roles as citizen, husband/wife, father/mother, driver, employee, etc. Those rules and laws are wrapped as, usually, time-bound contracts. Just using a taxi is a short-time contract with its rules for a passenger and a driver.

IoT as cyber-physical systems must follow some rules & regulations & laws to become a very useful member of our civilisation. The famous example of such laws is “The three laws of robotics”.

Let us apply this practice of contract-based rules & regulations & laws to the Internet of Things – let us teach Things to follow their contracts thus domesticate Things. 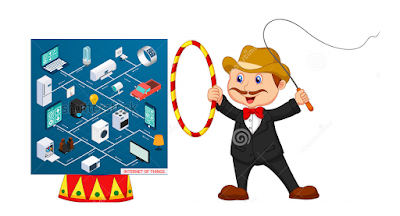 
For example, a future household fridge will have, as minimum, five types of external contract simultaneously:
The fulfillment of some of those contracts requires the usage of the Internet. Thus, the Fridge must be able to “demonstrate” to the in-house network Router that the Fridge has rights to exchange data with some Internet-based services. Any data exchange with other internet-based services will be prohibited by the Router.


In addition, being a cyber-physical system, a Thing must follow many internal contracts. Governance of all software components must be carried out as contracts for requesting a change, approval of a change, etc. Actually, all the typical IT governance and operations processes are already well-defined in COBIT, ITIL and IT4IT. They, being designed for IT departments, have to be scaled-down to the needs of Things. Even a minimalistic patch-management processes will be a huge improvement.


The implementation of digital contracts can be simplified by the blockchain technology (as the best, so far, records storage) which provides integrity and traceability (see “Beauty of #blockchain - doveryai, no proveryai (trust but verify)” http://improving-bpm-systems.blogspot.ch/2016/10/beauty-of-blockchain-doveryai-no.html ).

Considering that, capabilities of particular Things may be rather different, some kind of a “majordomo” Service may be necessary to execute various digital contracts; Things will be participants in their workflows.

Also, in complex households some coordination between various digital contracts must be carried out (e.g. no preventative maintenance during receptions). This is a natural job for a “majordomo” Service. Obviously, it has its own digital contracts with the People who are living a particular household.


The proposed use of digital contracts, explicit governance and blockchain can make an impression that it will increase the complexity of IoT. Fortunately, this is not correct, because although more components will be necessary, the links between them become explicit.

- from “Complex” situation (in which the relationship between cause and effect can only be perceived in retrospect, but not in advance)

- to “Complicated” situation (in which the relationship between cause and effect requires analysis or some other form of investigation and/or the application of expert knowledge).

Of course, a lot of painful standardisation and regulatory work is necessary ahead, but, in accordance with a Russian proverb “volkov boyat'sya — v les ne khodit'”, no pain no gain.