I was asked for advice on how to grow from a business analyst to a business architect. Below is my list of things to learn.


understand processes as the most popular #bizarch artefacts

know how culture may effect organisation

know "business architecture" from http://www.businessarchitectureguild.org/ and get certification

know the relationships between all #bizarch artefacts (very important)

specialize in e-gov or healthcare or other domains

The huge cost of failed healthcare projects confirm that the problem is systemic. To solve it let us expand the scope to the whole healthcare eco-system. Without doubts, each healthcare organisation within the eco-system has its unique business processes, but those processes are “constructed” from typical business working practices. The latter can be common for any sector as well as specific for the healthcare sector. Thanks to BPM, these working practices can be formalised as actionable (e.g. in BPMN) process fragments.

To have such common platform, a healthcare reference model must be developed and accepted. For example, it can be based on the synergy between: 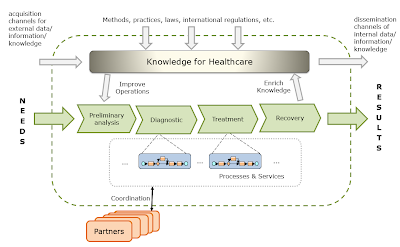 A platform-based implementation architecture (http://improving-bpm-systems.blogspot.ch/2011/04/enterprise-patterns-peas.html) is based on the following considerations:

The platform will accelerate the implementation of following technology-enabled innovations.

The main participants in the whole healthcare eco-system and their concerns are listed below:
Some of those concerns will be address by mentioned above innovations. 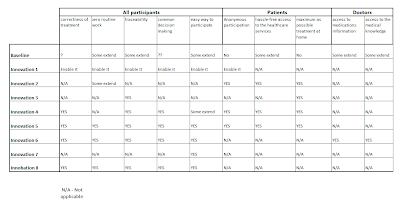 #entarch can help #healthcare in the following way:
The wide use of the same platform will allow Geographical expansion of services, the virtual doctor's office and unification of basic healthcare services.

#BPM enables #cybersecurity because the latter is an inside job

Blogpost of Larry Karisny "Is Cybersecurity an Inside Job?" -- http://globalriskcommunity.com/profiles/blog/show?id=5112778%3ABlogPost%3A151183&xgs=1&xg_source=msg_share_post (registration required) concludes that

QUOTE START
Problems occur in business processes when someone or some technology does something wrong whether intentional, mistakenly or as part of a targeted attack. We can only achieve true security when multiple actions and process can be detected simultaneously and in real time. New technologies are offering these capabilities in a time when we are rapidly expanding interconnected humans to intelligent machines that have capabilities that are so large we are having trouble even viewing these processes.

We need to start recognizing that authentication of a person no matter how accurate the techniques used are only the first level of cybersecurity. True security can only be achieved when combining prevention and detection technologies at the real time business or process input action level. Most security breaches occur quickly and are themselves an input process action. Using technology than can focus on these input actions is where we need to focus our efforts.

True cybersecurity will be obtained when we can effectively view, audit, correct and block organizational process actions. If you could have a technology that does this, then why not?
QUOTE FINISH

Maybe, instead of reactively "view, audit, correct and block processes" at run-time, proactively build-in the security into business processes at design-time?

A few examples of how BPM addresses security concerns are below.

The blogpost http://improving-bpm-systems.blogspot.ch/2011/10/ea-view-on-enterprise-risk-management.html shows the big picture in which each process is enriched with the security/risk monitoring and evaluation.

The blogpost http://improving-bpm-systems.blogspot.ch/2012/09/practical-process-anti-pattern-doum.html recommends that any resource must be available only if an actor is carrying out a particular activity in a particular process instance.

And the slides 25-27 from http://improving-bpm-systems.blogspot.ch/2013/04/addressing-security-concerns-through-bpm.html show that some security can be guaranteed at the design time. It is possible to design cybersecurity not only within a particular process template, but also within a system of process templates.

Thus, explicit and executable business processes will help to improve the security (sure the architecture defines how).

Bryant Duhon  from the AIIM has informed me that my proposal to reduce the use of paper in the business is in the top 4.

The idea is very simple: "The management (from top level down) stop accepting (reading, commenting, signing, etc.) documents on paper (and other physical media). " and its potential implementation is in http://improving-bpm-systems.blogspot.ch/2013/02/towards-paperless-or-digital-or-less.html

Please vote for it at https://www.surveymonkey.com/s/PSK8N9R

This blogpost is available only in Russian language - http://egov-tm.blogspot.ch/2013/10/egov-20-la-russe.html

Any procedure to take a decision among several people must be discussed, agreed and formally expressed in advance.  This blogpost is aimed to demonstrate the use of BPM and BPMN for expressing decisions as actionable patterns.


Some business practices are combinations of decision patterns:


Example of e-vote in BPMN  is at http://improving-bpm-systems.blogspot.ch/2013/07/practical-process-patterns-avs.html

#egov to help #UNDP about better governance and anti-corruption

This post is inspired by the article "The time is right to place governance and anti-corruption at center stage" (http://www.undp.org/content/undp/en/home/ourperspective/ourperspectivearticles/2013/09/30/the-time-is-right-to-place-governance-and-anti-corruption-at-center-stage-rebeca-grynspan.html#!). The article ends with "Talk to us: How can we help governments establish credible mechanisms to fight corruption?". My answer to this question is below.


As an architect of complex information systems (at the scale of canton, confederation, country, and continent), I think that a systemic approach to reduce the corruption is based on a proper architecture for e-governments and e-governance. Such an architecture will make everything transparent and traceable (thus accountable and trustful) by:
My experience shows that many e-government and e-governance applications are almost the same in various ministries and countries. The level of variations between countries is estimated at about 20 %. Thus it is possible (thanks to modern information technologies) to develop a common platform for e-governments and e-governance which is implemented once and then employed many times in, for example, developing countries.

In more details this concept is presented in my several public blog posts:

Formal consultations within an organisation is a very popular organisational process. And it looks very simple - just send a memo. This simplicity even confuses some technicians: in one organisation the IT Director has claimed that e-mail is enough to automate this process.

But, there are some complications.  Firstly, there are different consultations:
Secondly, it is a recursive process: the President sends a memo to Directors and each of them re-sends it to Divisional Managers who ask some of their specialists to prepare a reply.

Thirdly, some combinations of different consultations are possible. A staff member sends a memo to his/her manager with copies to colleagues concerned (upstream ) and the manager asks somebody to validate this memo (downstream).

Let us try to express all this complexity is the following diagram. There are four roles: Boss (who receives the issue), Reviewers (who are assigned to prepare a reply), CCs (who are just informed about the issues and final reply) and Workers (who, sometimes, must do something before sending the final reply).

Of course, there are a few tricks:
Thanks,
AS
Posted by Alex at 14:34 0 comments

A quick feedback from the conference "BPM in practice" in Vilnius, Lithuania. http://www.bpmpractice.lt/en/

I found very interesting the two following slides from the first keynote talk. 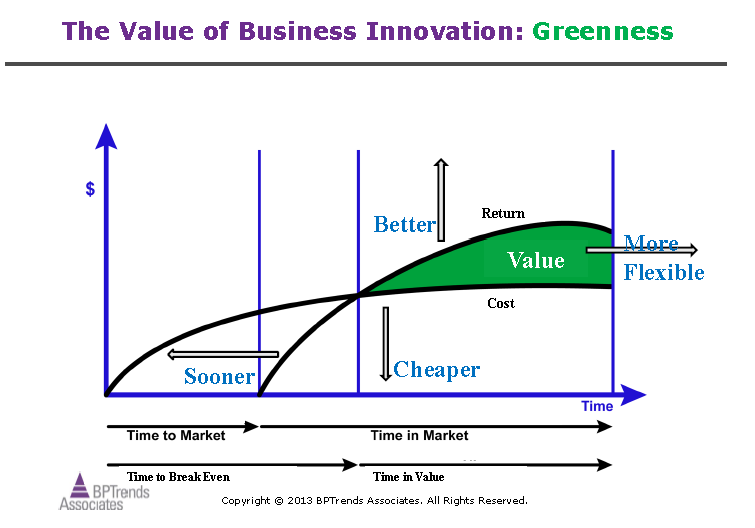 A nice linkage between the value and four types of improvements which are achievable because of the architecture works. 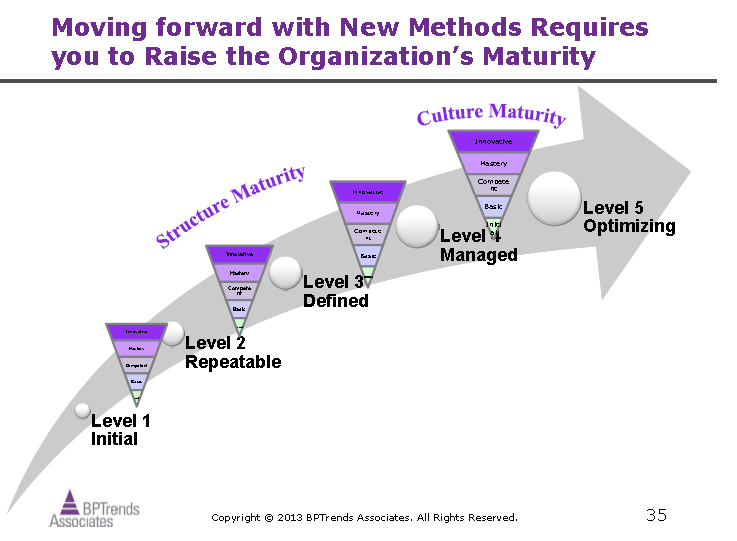 And my presentation is below (please note that some slides have animation). 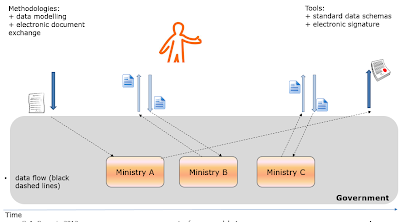 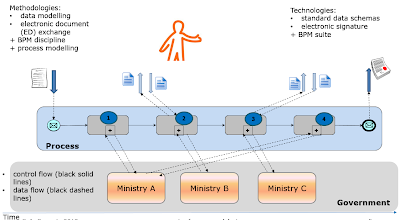 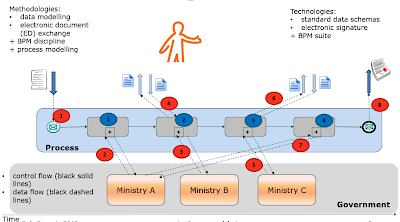 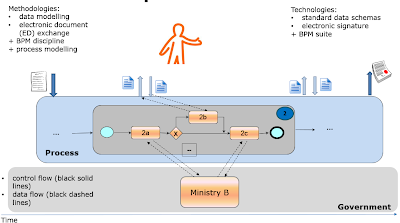 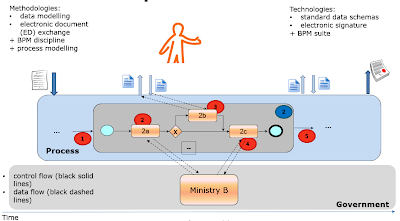 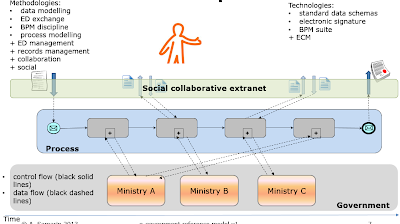 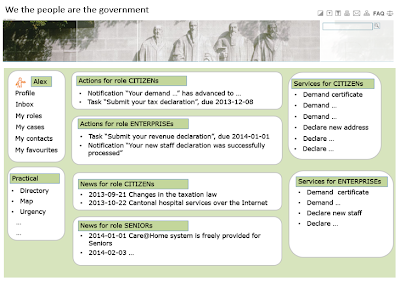 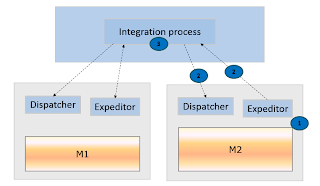 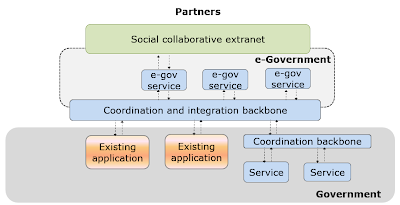 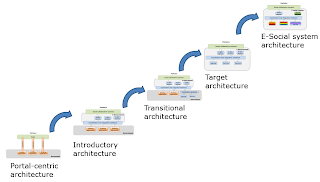