Overall common city goals include, for example, sustainable development, efficiency, resilience, safety and support for citizen’s engagement and participation. However, an individual city will follow its own approach in smart cities programmes and projects.

The current implementation practices of smart cities are rather disjoint, namely:
As a result, there is no agreed basis for efficient and effective cooperation and coordination between different smart cities programmes and projects. They carry out a lot of duplication of work, developed solutions are not reusable, the same mistakes are repeated.

The systems-level standardisation (which is carried out by the IEC Systems Committee “Smart Cities”) will offer to smart cities programmes and projects commonly agreed and fully traceable deliverables, namely:
The openness of those deliverables allows easily adjust the reference architecture to an individual city and re-use already available standard elements.

The smart cities vision can be illustrated by the following figure. 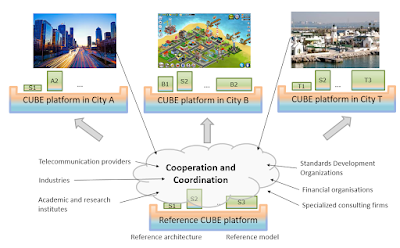 
Being equipped by those deliverables, various smart cities programmes and projects can carry out efficient and effective cooperation and coordination among them thus
At present, there are 4 Systems Committees (SyC):
And one System Evaluation Group (SEG):

The IEC system-level standardisation is based on the IEC Systems Approach.