Beauty of #blockchain – separating the wheat from the tares

As we know, the blockchain technology is actually a multi-user, centralised (logically) and distributed (physically) archive with excellent availability and integrity characteristics. Such an archive collects various records and packs them into chained and (practically) immutable blocks.

Why is it centralised? Because of the single uniform code base and the consensus process, i.e. a combination of “administrative” means and technology.

Numerous applications (e.g., bitcoin) use the blockchain technology to resolve the problem of “double spending”, i.e. if a record (which is a transaction in this case) spends the same “piece” of cryptocurrency more than once then that double “piece” of cryptocurrency it will be detected as “untrusted” and, finally, such a record (i.e. transaction) will be rejected by the blockchain-as-an-archive of records (or a ledger).

Thus, in such applications, blockchain plays two roles: ( see also http://improving-bpm-systems.blogspot.ch/2016/06/disassembling-blockchain-concept.html ).
Because these roles are not explicitly separated, the average time to store a transaction in the bitcoin application is about 10 mins because each transaction must be packed into a block and the “block time” is 10 mins. And, the "wait time" for POW blockchain is approximate 60 mins for minimal risk of a transaction is rejected. Obviously, this is not practical at the point-to-sale to buy a cup of coffee.

Actually, at the point-of-sale, a buyer and a seller need only the logical integrity, i.e. validating that a “piece” of cryptocurrency to be used in the transaction is “trusted”. The physical integrity is an “internal business” of the blockchain-as-an-archive.

So, the blockchain-as-an-archive has to have a validating function that confirms a particular “piece” of cryptocurrency is “trusted” by three conditions:

There can be several simple algorithms for implementing such a validating function, e.g. by asking to vote a random collection of miners.

The both sides of any transaction (the seller and the buyer) may check independently the level of trust for involved “pieces” of cryptocurrency. For example, the seller may define its own level of “trust” thus rejecting some “untrusted” (from his/her point of view) “pieces” of cryptocurrency. This is very similar to old good practices when a cashier (or booking-clerk) was checking some new banknotes.

Thus, by separating the logical integrity and the physical integrity, it would be possible to improve performance of some applications which are based on blockchain-as-an-archive.

And thanks to Charles Moore for reviewing this blogpost.
Posted by Alex at 18:50 1 comments

My presentation for BrightTalk


And some feedback from the organisers.

You had 362 pre-registered users and 122 views so far. 36 people downloaded your slides and you got 4.2/5 rating for your webinar.

All users said it was a very useful presentation, but I would like to highlight one in particular about acronyms:
"I missed the 1st minute or so of the presentation. There may have been a table of acronyms presented then because I didn't see any explanation later during the presentation. It would be very helpful if acronym definitions were provided. otherwise it was a very broad presentation encompassing a host of smaller topics worthy of discussion in themselves. It was well done and the presenter was fully competent concerning the subject matter. Thank you"

Fortunately, as we know, various performance characteristics (e.g. easy to update, easy to scale) are not spread uniformly within applications. For example, 95% of CPU consumption is located in 5% of program code. Thus, it is not necessary to implement the whole application via microservices.

Let us ask a simple question, if a microservice is, actually, a service then can we use microservices and services together? Yes, and some functionality from platforms or monoliths may be used (via API) as well.

Now, let us reformulate the problem. Let us consider that any application is built from many units-of-functionality which must be deployed and then executed. What is the optimal arrangement of units-of-functionality into units-of-deployment and then units-of-execution? In other words,
Thus, a few recommendations may be formulated.
Applying these recommendations to some phases of the whole application life cycle (conception, development, deployment, production, support, retirement and destruction) the following recommendations may be formulated: 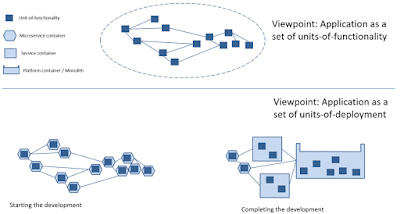 This confirms the primacy of the “microservices first” approach. This approach, actually, provides support for BizDevOps practices ( see http://improving-bpm-systems.blogspot.ch/2017/05/beauty-of-microservices-ebanliing.html ). Additionally, this approach enables interesting transformations such as automatic reconfiguration of applications to absorb the heavy workloads by moving temporarily some units-of-functionality from service-like implementation to microservice-like implementation.

Remember from prof. Knuth "Premature optimisation is the root of all evil".

The collection of posts about microservices - http://improving-bpm-systems.blogspot.ch/search/label/%23microservice
Posted by Alex at 09:47 0 comments